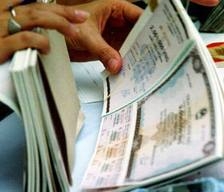 Vietnam's commercial banks have spent 160 trillion dong into corporate bonds due to the high interest rates offered, as well as its liquidity.

The high interest rates have climbed to as high as 22 percent.

Some have held worth 20 trillion dong, with the average buying one trillion dong. At some banks, corporate bonds account for up to 90 percent of their investment portfolios.

Dr Nguyen Tri Hieu, a well known banking expert, has noted that issuing corporate bonds at this moment is a

However, Hieu said, banks should anticipate risks in the investment deals. If the bond issuers go bankrupt, the corporate bonds, considered as a kind of normal debts, would become irrecoverable. In principle, banks would have to provision against the risks of the investment deals in bonds, but many of them have not done this.