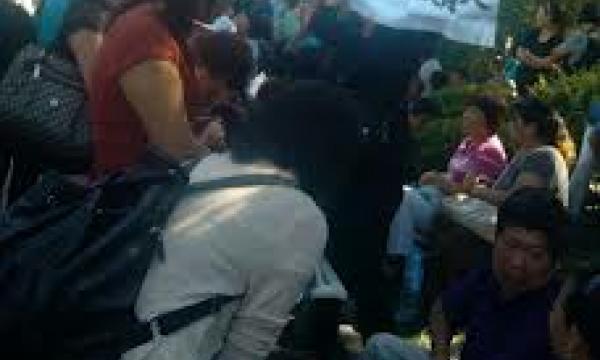 Over 1,000 disgruntled investors protested against the local government of Tianjin City outside the municipal building last Sept. 3 and 4.

They alleged that they were defrauded by the local government.

They demanded to speak to the mayor, blaming the municipal government for what they allege is wide-scale investment fraud.

Over the two days, a couple thousand people have demonstrated in front of the government building, chanting the slogan, ‘Zhang Gaoli, Cui Jindu, give back our money,” a protester named Li Peng told The Epoch Times:

“We, investors from various provinces including Shandong, Henan, Tianjin, Inner Mongolia, and Zhejiang, demand that the mayor solve our problems,” said Ms. Chen, another protester.

IIT Time Weekly magazine reported that the Tianjin government at all levels had urged people to invest in private equity funds from December 2010 to October 2011.

The promised monthly rate of return was high and the investment prospects alluring. Since it was promoted by the local government, many people invested their life-time savings into the PE funds.

Trouble started in early September when the company refused to pay the promised return, which then was followed by the disappearance of management personnel. The company eventually disappeared.

Shenghua is just one example, however. According to the ITTW report, the major PE funds in Tianjin have vanished without a trace, with over 1 million victims affected and over 100 billion yuan or US$15.78 billion stolen.

The magnitude of the fraud could have a national impact, representing the largest private equity fraud in China. Many families have been left ruined, and blame is falling on the Tianjin government.