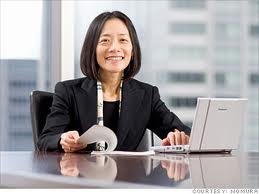 Thanks to fixed income operations.

Nomura used it to counter weak equity markets and the fallout from an insider trading probe.

As a result, it was able to posted its fourth straight quarterly profit.

Japan's top investment bank reported a net profit of 2.81 billion yen or $35.3 million for the July-September second quarter, against a loss of 46.09 billion yen in the same period last year..

But the results were weaker than expected as the company restructures operations following an ill-fated expansion overseas through the 2008 acquisition of parts of Lehman Brothers.

The consensus of eight analysts was for a profit of 5.7 billion yen.

But Chief Financial Officer Junko Nakagawa said the benefits of a $1 billion cost-cutting program outlined in August and largely focused on Europe could show up in the company's results by the final quarter of its fiscal year to the end of March.

"You will be able to see the real effect of cost-cutting plan in Q4 or at the beginning of the next fiscal year starting in April 2013," said Nakagawa.

The results were also supported by a boost in bond trading and other fixed income products, a major factor also bolstering banks elsewhere, including Morgan Stanley and JP Morgan Chase & Co.

Still, Nomura also lost underwriting business due to an insider trading scandal, which triggered a shake-up of top management. In the most high-profile case, Nomura was relegated to a more junior role on the $8.5 billion initial public offering of Japan Airlines.