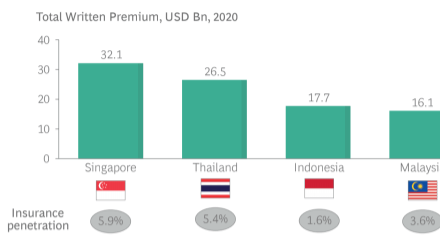 The Lion City also has the highest insurance penetration amongst the six markets at 5.9%.

At $43.04b (US$32.1b), Singapore is responsible for a major chunk of the total insurance written premiums of the six largest Southeast Asian markets in 2020, according to a joint study by Hong Kong-based ZA Tech and Boston Consulting Group (BCG).

All in all, the six markets recorded an estimated $142b (US$106b) in total written premiums for that year.

Thailand followed suit in terms of total written premiums at US$26.5b, followed by Indonesia at US$17.7b, Malaysia at US$16.1b, Vietnam at US$7.8b and lastly, the Philippines at US$5.9b.

This rapid growth was attributed to the accelerating digital landscape in the market, and the established insurance distribution model is evolving, the report said. Whilst insurers in Southeast Asia have traditionally relied on agents, brokers and bancassurance to sell policies, direct-to-consumer models have been emerging.

Digital players have also been forging partnerships with insurers even as traditional models may linger for the meantime, the report said.

Such partnerships can be beneficial for all parties involved, the report assured. Personalised offerings are on the horizon for customers, whilst digital players can gain additional revenue streams and insurers can benefit from larger distribution, expanded client bases, and more consumer data.

Several pioneering companies have already built partnerships with insurers, providing an early look at such opportunities in action. This includes Grab and Chubb, Traveloka and FWD Life, GoJek and Allianz, amongst many others.

By 2030, total insurance premiums for general insurance and life insurance in Southeast Asia are expected to grow to US$140b and US$60b respectively. With a rising digital insurance penetration, the opportunity for digital players and insurance companies is estimated to be US$10b.

How Hong Kong banks are benefiting from spiking US interest rates